This month usually celebrates the British dairy industry through the leading dairy showcase Borderway UK Dairy Expo, in Carlisle. In recent years, an integral part of this annual event has been the announcement of the winner of the John Dennison Lifetime Achievement Award. Despite there being no Borderway UK Dairy Expo event to attend this year, there has still been a presentation of this prestigious award. Yesterday, at his home, David Yates from Meikle Firthhead Farm, Castle Douglas, was presented with the John Dennison Lifetime Achievement award for, for his contribution to the dairy industry.

Born in 1931 and from a second-generation farming background, David established renowned Holstein herds which his sons Brian and David now run today. With an international reputation, his life achievements have been an inspiration to future generations – which now include his own grandchildren.

Commenting on the award’s format this year, Glyn Lucas, Harrison & Hetherington’s auctioneer and one of the judges said: “We did not want to cancel the award just because we had to cancel this year’s Dairy Expo. 2021 would have been the 10th Dairy Expo, and the Dennison Family felt it would be appropriate to present the award, albeit in a different format. So, this year, we had the privilege of presenting the award at David’s home, following a “This is Your Life” video reminiscing on all his accomplishments.

This highly acclaimed award, established in memory of Cumbrian dairy farmer John Dennison, aims to recognise a dairy cattle breeder who is judged to be a high achiever and exemplary role model. It is given to those who demonstrate the traits of the award’s namesake: a perfect combination of ability, sportsmanship, integrity, and character within the dairy industry.

Announcing this year’s winner, Glyn added: “On behalf of the Dennison family and our committee, I would just like to say that with so many tremendous nominations, judging and choosing the recipient really is a challenging task. David Yates’ career stood out as an outstanding example of exceptional work ethic, astute business decisions and a driving passion to improve the animals he managed. He is an inspiration to his family, and to others, and presenting him with the award was a special honour.”

Throughout his life David has shown and judged shows across the UK, and his passion still inspires others to this day. His two sons and grandchildren are involved in the industry, and his great grandchildren are displaying interest from their strollers.

Tom Lomas, who nominated David for the award, said: “Mr Yates was a perfect candidate for the award, because everything it represents is exactly what he is about. He has had his own success within the industry, but also encouraged the next generation to progress and to take the business forward. Talking about his farming life today, David says that he wishes he could still do these things, but that his body just will not allow it anymore. To me, this really sums up how great this man is - that even at the fine age of 90, he still wishes to get up, get out, and see the cattle world for how great it really is.”

At first, David was farming two farms by himself. He purchased his first, East Logan, in 1971, and the second, Firthhead, in 1989. In 1996, he handed the farms to each of his two sons, and the boys continue to manage them today.

David was initially a Dairy Shorthorn breeder but seeing that these were in decline, he decided to move onto Holsteins. By the mid 1990s he had converted to 100% Holsteins. Along the way he established strong links with Canada, having first visited in the fifties when he helped export nine bulls across the Atlantic from the Perth Bull Sales. In 1982, he established the pattern of an annual visit to Canada, where he had built relationships with Claud Picket of Pickland Holsteins and Peter Heffering of Hanoverhill Holsteins. Regular imports of cows have continued, with the early ones by direct flights into the nearby Prestwick Airport. Today, the East Logan and Micklefirth herds are built on cows that David bought or had shares in from North America.

On being presented with his award by the Dennison family, David said: “I’m highly honoured to receive the award. I’ve seen a lot of prominent people win it, and never dreamt it could be me. I can’t see what I’ve done to deserve it. It really is a great honour.” 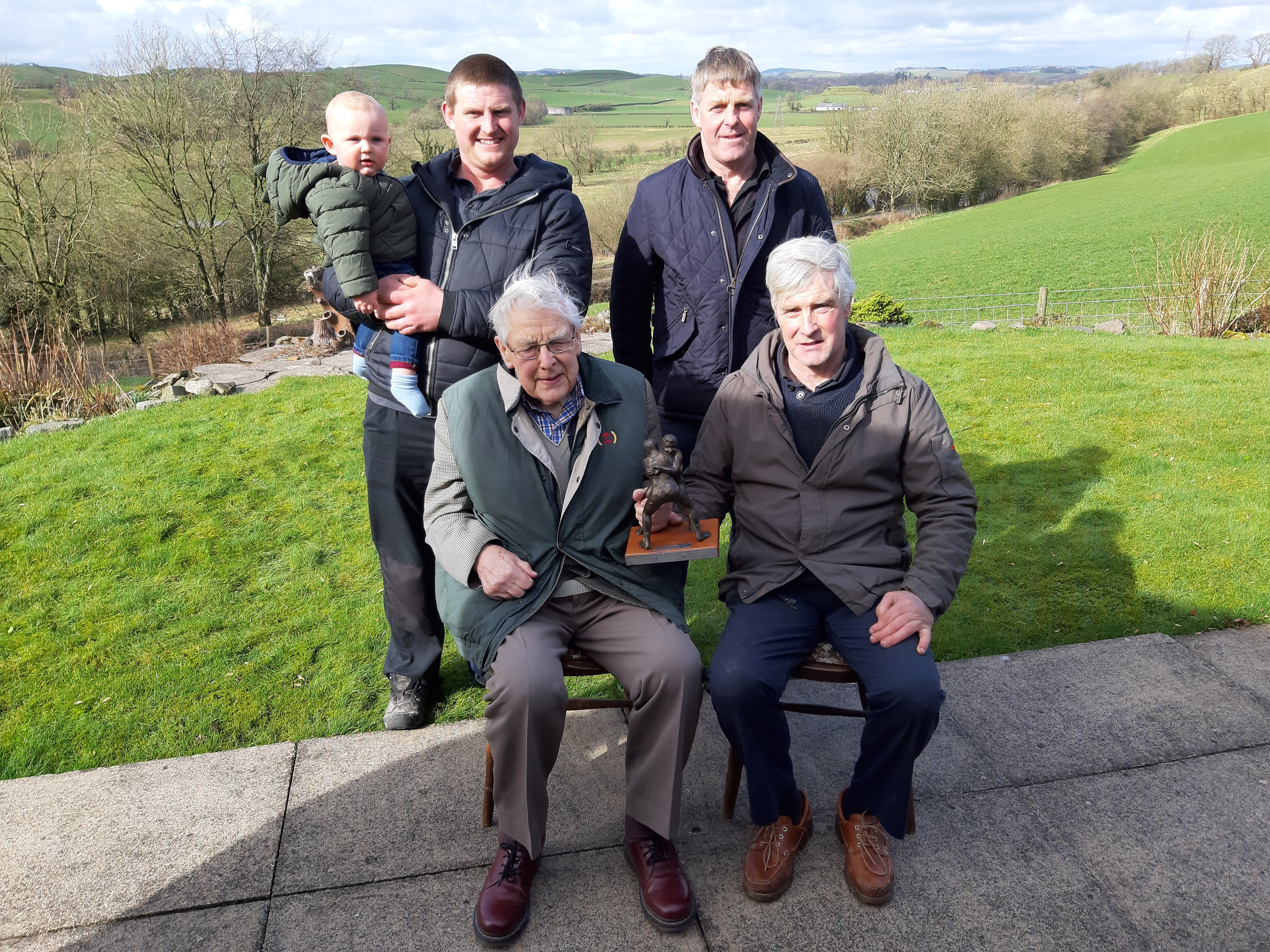