The April Border & Lakeland Holstein club sale had over 130 dairy cattle on offer from many of the leading herds from the North of England and Scotland.  Trade topped at 5,200gns for a heifer from the Apple cow family with the overall average coming to £2008 with the cow trade topping at 2,100gns for a stylish Brown Swiss.

The Show was sponsored by Dugdale Nutrition and was judged by Matthew Armour from the Annandale herd in Moffat.  He selected Espland Delta Lambda Ada as his Overall Champion who was consigned by Alan Cannon from near Appleby.  She was sired by Lambda and had a super balanced frame with a classy udder and sold for 3,000gns to Mr Millar from N. Ireland. 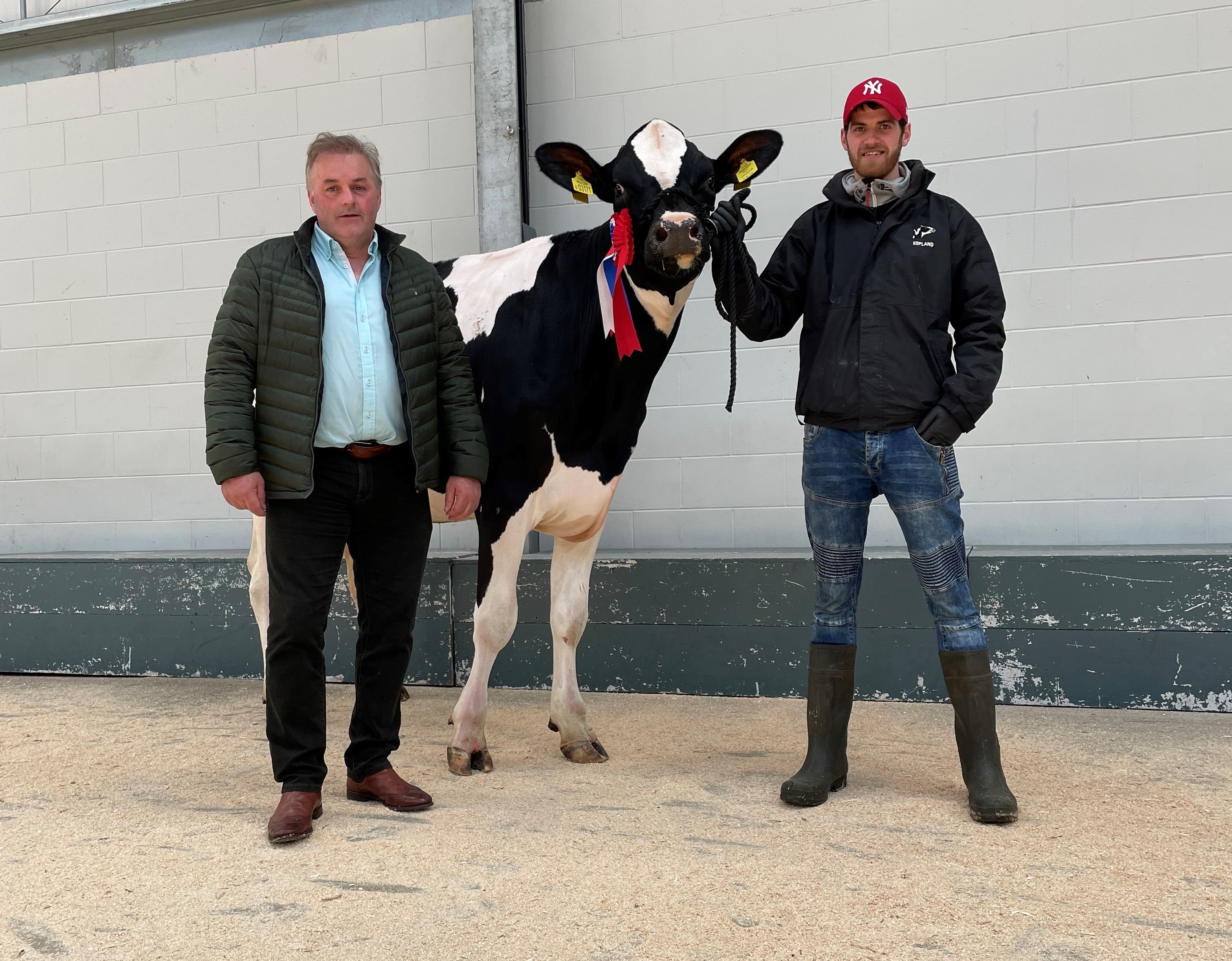 Topping the sale at 5,200gns was Boclair Crushtime Apple who was consigned by the Brewster family from near Glasgow and was purchased by Allmor Syndicate from N. Ireland.  This long stylish heifer was sired by Crushtime and has KHW Regiment Apple for a great grand dam.  Her dam is a Very Good Barbwire followed by a Very Good Alchemy, her Jordy sister sold for 6,500gns in last years April Club sale with all her sister classifying Very Good as two year olds.  The Boclair sold another three heifers to average £3050.

Stowbeck Holsteins sold seven powerful to average £2028 and topped at 2,550gns for Stowbeck Sidekick Lies who was purchased by Baltier Farming Company near Newton Stewart.  She was a super powerful framed heifer from an Excellent 93 pointed grand dam.  Stowbeck Pepper Breeze sold for 2,450gns to Mr Byres from Canonbie, she was bred from seven Excellent or Very Good dams all with huge production.

The Airey family owners of the Newcroft herd near Carnforth sold Newcroft Secretariat Pansy for 2,400gns to Mr Paul from near Lockerbie.  She was bred from the Pansy family going back to the Dalesend herd in Yorkshire with ten successive generations of Excellent or Very Good dams.

Selling for 2,300gns was Newcroft Ranger Quin who had been donated by David Airey with all the proceeds going to Cancer Research UK.  Quin was a super stylish show heifer with a really deep pedigree going back to the Gillbrook Holstein herd in Pennsylvania in the USA, she had placed 2nd in the February Calf class last year in the Lancashire Calf Show.  This special heifer was purchased by the Baltier Farming Company near Newton Stewart with Ted Fox from St Johns Kirk also contributing £250 to bring the total raised to £2665.

Cows topped at 2,100gns for the first place cow who was consigned by Robert and Shelia McColm from near Stranraer.  This super uddered Brown Swiss, Soulseat Rembrandt Elegance was a freshly calved in her second and was giving 46kgs and will no doubt grace a few show rings this year.

Our next dairy sale takes place on Wednesday 4th May and features 250 dairy cattle in the May Borderway Monthly Dairy Day sale.  Catalogues for this sale can be viewed online at www.harrisonandhetherington.co.uk or can be order from the Pedigree Office 01228 406230