ELEGANCE HITS THE SUMMIT FOR CARROCK

Buyers had an outstanding group of cows and heifers to choose from in the St. Patrick’s Day Border & Lakeland day sale.  The catalogue featured animals from Roxy, August, Shower, Elegance and Dandy cow families that were giving large volumes of milk.  Trade topped at 3,300gns with the overall average coming to £2016; 35 animals sold for or more than £2000 which was 50% of the sale.

Dugdale Nutrition sponsored the show and Ian Mitchell from Mirckbooths Farm near Carlisle judged the classes.  The Overall Champion sold for 3,300gns and was purchased by Baltier Farming in Newton Stewart.  Carrock Kingpin Elegance was consigned by the Brough family from Buckabank Farms near Dalston.  She was sired by Kingpin and is potentially the 10th generation of Excellent cows, the five generations averaged 94 points. 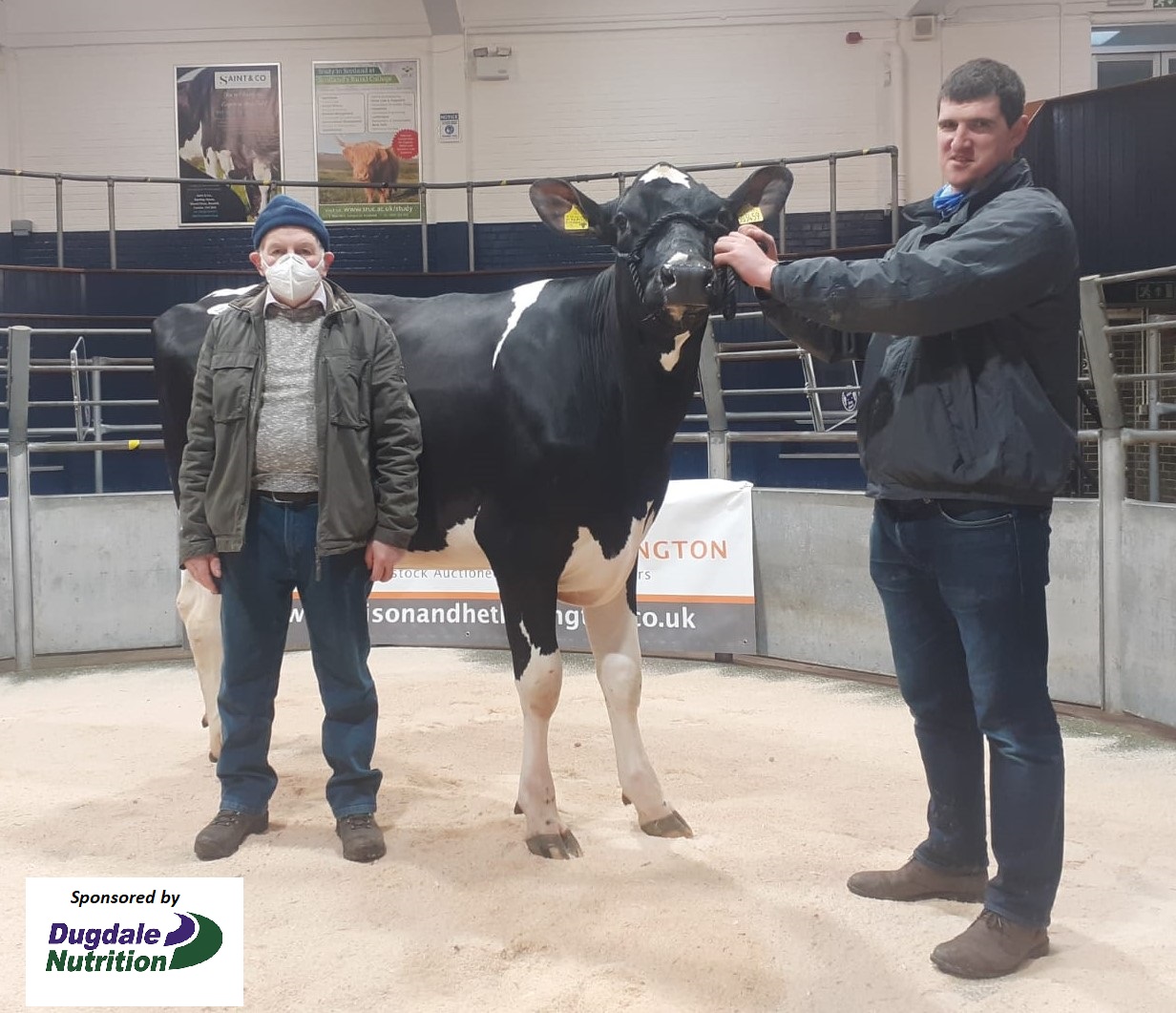 The Reserve Champion went to Berryholme Secretariat Dandy consigned by the Wright family from Kendal.  She was bred from an outstanding line of the Dandy cow family that originated from the Walkerbrae herd in Ontario.  Her third dam was the Excellent 96-pointed cow Ingleview Rudolph Dandy.  This perfect udder heifer sold for 3,000gns to Baltier Farming in Newton Stewart.  Berryholme sold a Dempsey daughter for the Roxy cow family for 2,600gns to Harry Roper from Preston.

The Tinehill Holstein herd owned by the Alderson family from North Allerton sold six cows and heifers to average £2310 and topped at 2,900gns for Tinehill Beemer Shower who was purchased by Jim Henderson from Mauchline in Ayrshire.  Beemer Shower was bred from ten generation of Excellent or Very Good with the first seven all Excellent.  Her sixth dam was the 44 Star Brood cow Glen Drummond Shower.

Selling for 2,700gns was Twinfields Modesty Handlouis consigned by Richard Bainbridge from Carnforth and was purchased by Leyburn Faming Company in N. Ireland.  She was sired by Modesty and bred from the Global Cow of the year Cookiecutter Mom Halo the dam of Halogen at Select Sires.

Balcurvie Holsteins from Fife sold fifteen heifers to average £1958 and topped at 2,300gns for a daughter of Sandy-Valley Bonjour.  She was bred from a super line of cows form the Bervie Holstein in Angus with both dam and grand dam with lactations over 15000kgs.

The next dairy sale at Borderway takes place on the 7th April and features 200 dairy cattle in Borderway Monthly Dairy Day sale.  This sale features 10 Pedigree Fleckvieh bulls and 14 Fleckvieh cross bred in-calf heifers.  Catalogues for this sale can be viewed online at www.harrisonandhetherington.co.uk or can be order from the Pedigree Office 01228 406230