The Border & Lakeland Holstein Club sale once again provided milk producers with an outstanding choice of cows and heifers.  These animals were all producing large volumes milk consigned from herds with excellent health status and pedigrees that matched the quality on offer.  Trade topped at 3,100gns with the overall average coming to £1948; 47 animals sold for or more than £2000.

Dugdale Nutrition sponsored the show and Robert Morley one of the up-and-coming young breeders in the Border & Lakeland Club judged the classes.  The Overall Champion was the top price cow selling for 2,100gns and was purchased by the Wilson family from Carlisle.  Espland Impression Anglela was consigned by the Alan Cannon who has commenced the dispersal of the Espland herd.  Angela had calved in December and was bred back to back to Applicable and completed the fourth generation of Very Good classified cows. 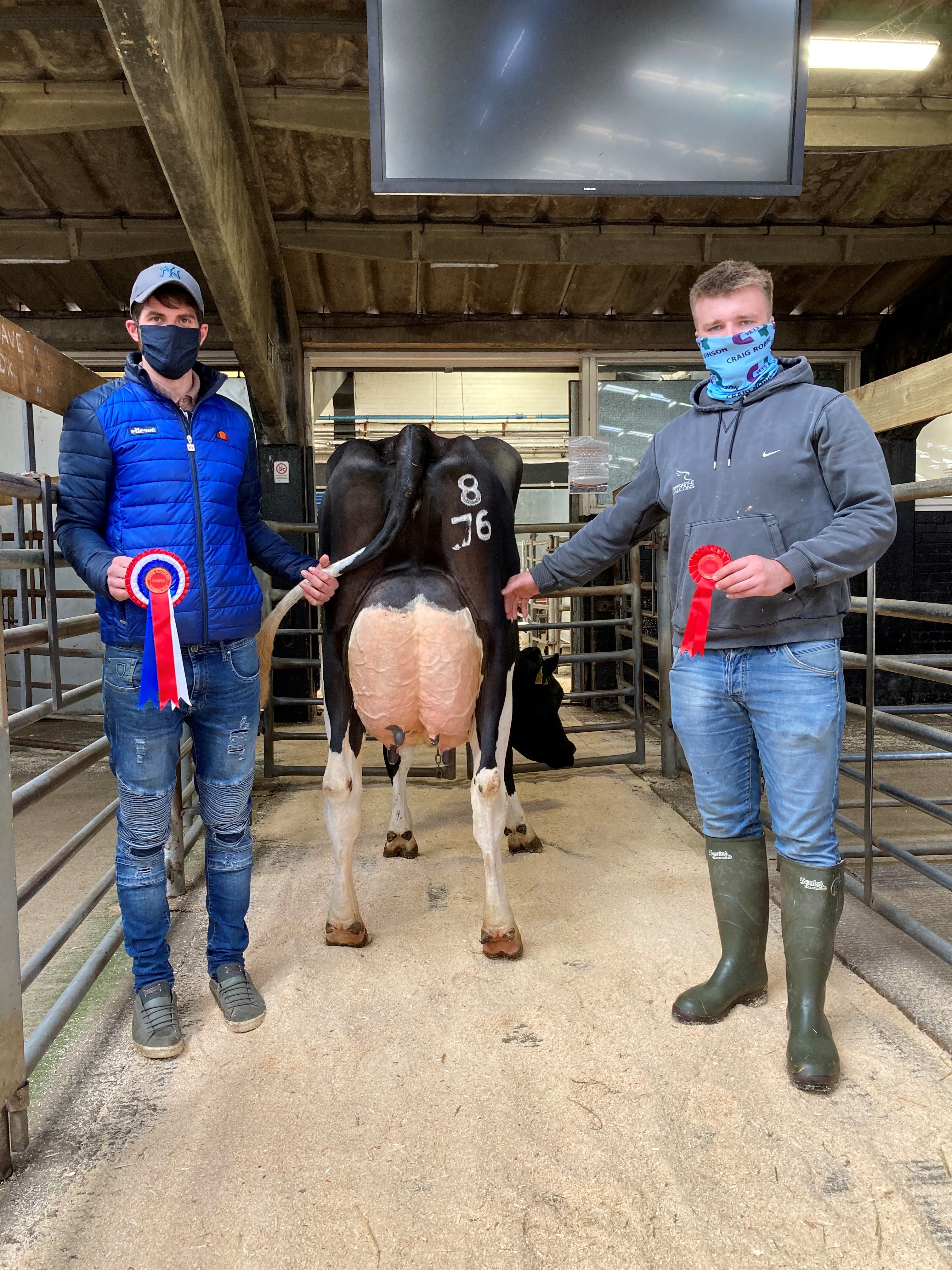 The Reserve Champion went to Espland Lighthouse Marilyn and sold for 2.300gns to volume buyers Baltier Farming Company near Newton Stewart.  Marilyn was sired by Lighthouse and was classified Good Plus 84 points.  The Espland herd sold 30 cows and heifers to average £1727 with ten other animals selling for or above £2000 including Espland Cannon Betsy a VG85 two year old who sold for 2,300gns

The Star from Stardale topped the sale at 3,100gns and was purchased by Baltier Farming Company.  Stardale Doppler Jodie and is bred from the Fradon Rudolph Jodie cow family, her grand dam is an exceptional cow at Stradale with 120 ton already produced and she’s due again with her eleventh calf.  This amazing uddered heifer will complete eleven generations of Excellent or Very Good cows.

The Boclair herd had four super udder heifers all giving oceans of milk and topped at 3,000gns to average £2520.  Boclair Doc Gypsy was sired by King Doc and was giving 45kgs, she was a silky hided heifer and oozed style.

The Wright family from the Berryholme herd sold three heifers to average £2502 and topped at 2,700gns for Berryholme Lighthouse Flo who was purchased by Baltier Farming Company.  Flo had a super attractive udder that matched her equally attractive pedigree.  Her sixth dam was Holmland Strom Flo who was the National Holstein Champion in 2000.

Kepculloch Delta Lambda Rose sold for 2,400gns to Mr McCamley from Ayrshire.  She was sired by Lambda and was bred from the EX93 AltaRoss Rose cow that gave over 13000kgs.  Robert Steel from the Kepculloch herd sold another three heifers to average £2362.

Balcurvie Holsteins from Fife sold seven heifers to average £1897 and topped at 2,400gns for a daughter of Sandy-Valley Pharo.  She was bred from the Tessie cow family from Joylan Holsteins and was purchased by Mr McCamley from Ayrshire.

An outstanding group of heifer calves from the Newcroft Holstein herd topped at 850gns for Newcroft Lineman Lulu who was purchased by Mr Sharp from Yoorkshire.  She was sired by Comestar Lineman from the Lulu cow family tracing back to Hanoverhill.

The next dairy sale at Borderway takes place on the 5th May and features 280 dairy cattle in Borderway Monthly Dairy Day sale.  This sale features the first sale to disperse the Grange herd for the Ramsay family.  Catalogues for this sale can be viewed online at www.harrisonandhetherington.co.uk or can be order from the Pedigree Office 01228 406230