The Borderway Sale Centre has a vast array of dairy cattle on offer for the October Monthly sale with Holstein, Ayrshire, Montbeliarde, British Friesian and Pro Cross cattle selling. 351 animals changed hands with trade topping at £2350, the average for milking heifers remained similar on the month coming to £1704 for 114 heifers in milk.

Topping the Holstein heifer trade at £2300 was an outstanding heifer consigned by Richard Livingstone from the Kirtlevale herd near Gretna. Kirtlevale Ruby Red was sired by Riverdane Artist Red and was bred from a Very Good dam. Eight other heifers from this home sold to average £1907.

The Holstein cow trade also topped at £2300 for Witherslack Gras Ivory consigned by Wayne Inman from Grange Over Sands. This super young cow was bred from an Excellent dam and was giving 46kgs.  Another four cows and heifers from this home averaged £1937.

Overall top price went to an amazing uddered daughter of MVP bred from a Montbeliarde dam. She was consigned by the Workman family from the Beeches Farm near Carlisle and sold for £2350. 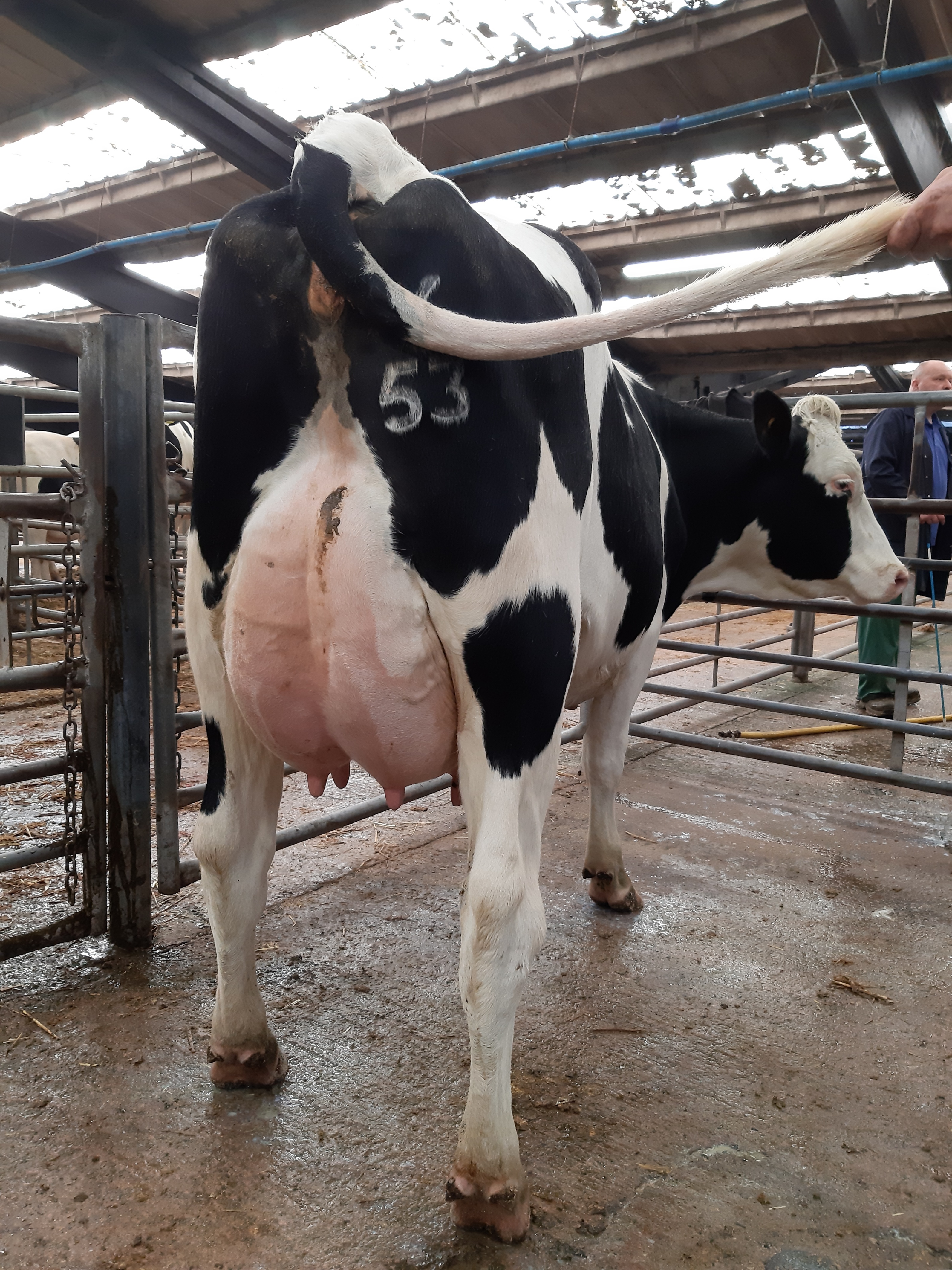 The Wreaywood Holstein herd sold 22 Holstein cows and heifers to average almost £1900 and topped at £2200 for Wreaywood Copper Sietskie. She was milking in her second lactation and was sired by Glamour Boghill Cooper.

Balcurvie Holstein sold a super milky group of 29 heifers all giving oceans of milk and topped at £2050 on three occasions. The first was for Balcurvie Roble Carol she was sired by AltaRoble and bred from a Flame dam with super butterfat and protein.

The Kaberfold Holstein herd owned by Mr Dent was dispersed following the milking sale. The Dent family have been milking cows at Kaberfold Farm for eight generations and have been an influential farming family in Cumbria.  This fine herd averaged £1283 and topped at £2200 for Kaberfold Uno Maralin.  She was sired by Uno and had recently calved in her first she traced back to a super line of Excellent 92 classified cows from the Whitebarn herd from South Wales.

In-Calf heifers remain excellent value for money with many selling well below their true value. Holstein In-Calf heifers averaged £1247 and topped at £1750 for a daughter of Kingpin and was bred from a Penley dam with over 14000kgs as a three year old. She was consigned by the Colquhoun family from Aberdeenshire.

The sale finished with some excellent heifer calves from the Branchalburn herd that was dispersed in last month’ sale.  These four week old calves topped at £400 for daughters of Lightyear.  A super group of heifer calves from the Newcroft herd sold to a top of £560 for a daughter of Panda DonaldTrump Red daughter.

The next dairy sale at Borderway takes place on Wednesday 20th October and features 200 Exceptional Pedigree Holstein cattle in the Border & Lakeland sale which includes the Wormanby Autumn Youngstock Sale.   An online version of this catalogue can be viewed at www.harrisonandhetherington.co.uk or can be ordered from the Pedigree Office 01228 406230